The attractions of the city located 60 kilometres from London include “The Pantiles“, a tree-lined promenade with colonnades that was established in the 17th century.

Wiesbaden’s twin town is an elegant spa town with much to offer, for example Chalybeate Spring, a mineral spring discovered in the early 17th century by an English nobleman. Along this spring, a tree-lined promenade with colonnades was established. It is now called “The Pantiles“ – in remembrance of the original pavement of the area with square brick tiles called pantiles. Just beyond the spring, a bath house with steam baths and showers was built in 1804.

The statue of the harvest goddess Ceres, which graces the main entrance to the theatre, reminds the visitor that the building, which was erected in 1804, was used as a grain silo after 1843. The border between the Kent and Sussex counties once ran between the stage and the audience. Other sights of the city include the Museum and the Art Gallery. It displays for example wood mosaics (Tunbridge ware) that are made in a manufactory in Tunbridge Wells. 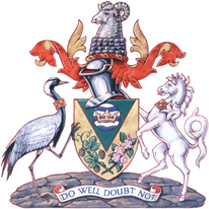 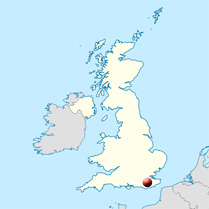