At the point where the Rhine River and the Main River converge, Mainz is able to look back on a history of more than 2000 years. Already in 38 BC, "Mogontiacum" was the starting point of the Roman conquest of the ancient territory known as Germania. Mainz has been a Roman city, a free imperial city, the residence of princes, an industrial city, and last but not least a media city. "Golden Mainz" has undergone numerous transformations in the past centuries. All of these phases have left their traces.
Antiquity comes alive with a visit to the Central Roman- Germanic Museum or to the Museum for Ancient Ships, with its impressive reconstruction of Roman warships. Visitors feel close to the Middle Ages when strolling through the historic city centre. The impressive Romanesque St. Martin's Cathedral and the Gothic Church of St. Stephen, but also the crooked alleys with their halftimbered houses and many comfortable wine pubs are all to be found here.
Despite severe war damage, many Baroque Age palaces belonging to nobles have been preserved and still characterize the cityscape. They include the "Deutschhaus", which is now the seat of the State Parliament of Rhineland-Palatinate. Since Mainz transformed itself into one of the most important industrial cities in the 19th century, numerous companies with an international reputation have made their homes here. The "Schott-Werke", one of the most important manufacturers of glass in the world, is the symbol for cuttingedge technology in Mainz.
The Mardi Gras season dominates public life in the city. The numerous carnival guilds and clubs organize an almost unbelievable variety of events and parades. The highlight is the "Rosenmontag" Parade during which carnival revelers love to poke fun at local and national politicians.
The people of Mainz like to remember that letterpress printing was invented here in the 15th century. The inventor and businessman Johannes Gutenberg introduced the first revolution in publishing from this city. The history of printing from the beginnings to the present is on display in the Gutenberg-Museum. Nowadays, Mainz is a major media city due to the presence of radio and TV. ZDF, the largest television broadcasting station in Europe has its headquarters at Mainz-Lerchenberg. 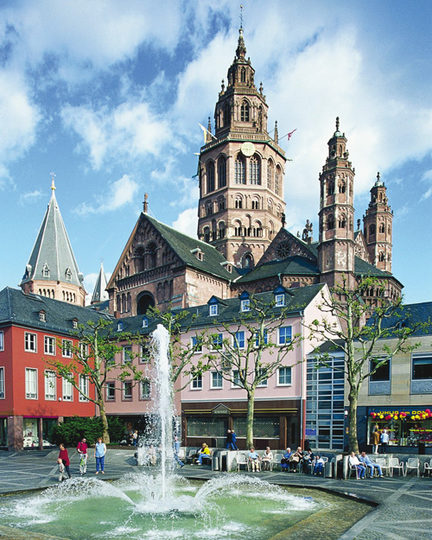