Ludwig Beck was born the son of industrialist, Ludwig Beck and his wife Bertha (née Draudt) on June 29, 1880 in Biebrich. After finishing school, young Ludwig joined the Prussian army as a commissioned officer. Following his service, he attended the war academy in Berlin and was enlisted to the Great General Staff as a captain in 1913.

As a General Staff Officer during World War 1, he overlooked various commands on the western front. He then entered the German Armed Forces (Reichswehr) in 1919 where he advanced to General. In the newly created Wehrmacht (Armed Forces), Beck was named General of the Artillery. As Hitler announced his plans in 1938 to annihilate Czechoslovakia, many areas of the Officers Corp thought differently. Chief of General Staff, Ludwig Beck, was the Corp’s official speaker. He warned his superiors and the Hitler of this grave plan. While Colonel General Brauchitsch agreed with him, Hitler angrily rejected Beck’s views. Beck tried to convince the generals to resign from their positions. Although Brauchitsch shared Beck’s conviction that war would be disastrous for Germany, neither he nor the other generals could bring themselves to carry out such a drastic step. Shortly thereafter, Beck declared his resignation in August of 1938 and was discharged of his position in the armed forces.

After the failed attempt to bomb Hitler in the area known as “the Wolf’s Lair“ near Rastenburg in Eastern Prussia, the resistance group’s coup, which included Beck, also failed. Beck was arrested in the area of Berlin known as Bendlerblock by units of the Wehrmacht. Just before midnight, Ludwig Beck was forced to attempt suicide twice, but both attempts failed. Thereupon he was shot by a sergeant of the Wehrmacht. 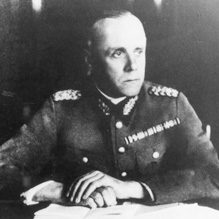