The churches in Wiesbaden help to keep music alive and well in the city. The architecture of these places of worship is remarkable.

In the Bergkirche, St. Bonifatius, Lutherkirche, Marktkirche, Ringkirche – all built in the 19th or the beginning 20th century – spiritual and classical works by well-known composers are regularly performed. While the choirmaster of the Bergkirche cultivates chamber music, the Bach Choir, which has its home in the Lutherkirche, regularly performs major oratories, both here and abroad. Moreover, two major concert organs bring the history of music from all eras to life. St. Bonifatius frequently offers concert music and choir performances during masses. At the Marktkirche at the Schlossplatz, a carillon can be heard three times a day, and Saturdays at noon, the choirmaster plays the carillon "live" for 30 minutes. Prior to this, "organ music during the Farmer’s Market" can be heard as of 11.30 a.m. This church from the year 1862 is also the venue for international choir concerts.

The Ringkirche provides a forum for experimental music. The "Xang", ”New Spirit” and "Gospical" gospel choirs which stages at different churches are also wellknown. For over 40 years the Schiersteiner Kantorei has enriched the musical life of Wiesbaden in a most defining fashion. With a high level of musical sophistication, its singers perform concerts of choral music with a repertoire from Baroque to contemporary. In the historical church of Schierstein not far from the Rhine river, all of the Bach cantatas will be performed, in alternation with the Marktkirche, during a monthly Bach vespers service. The Wiesbaden Knabenchor (Boys' Choir) has given many performances in many places and has a sophisticated repertoire. The oldest church in Wiesbaden (built around 1100 A.D.) is located in Bierstadt. In addition to its traditional "Cantate Domino" choir, there is a Taizé Choir here, which performs modern spiritual songs. 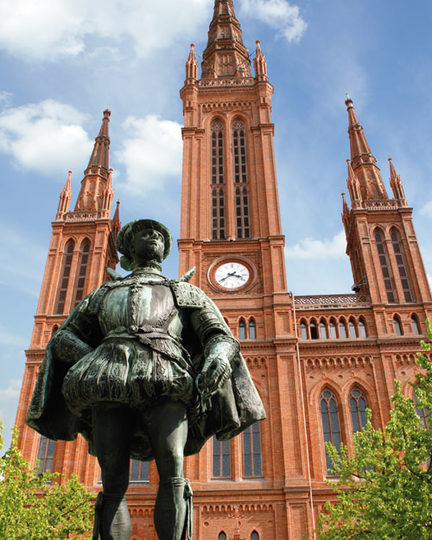